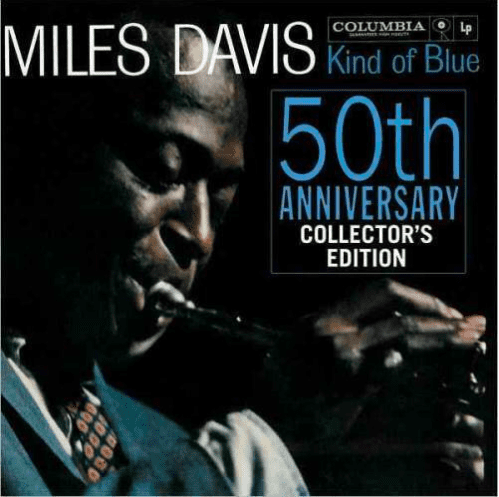 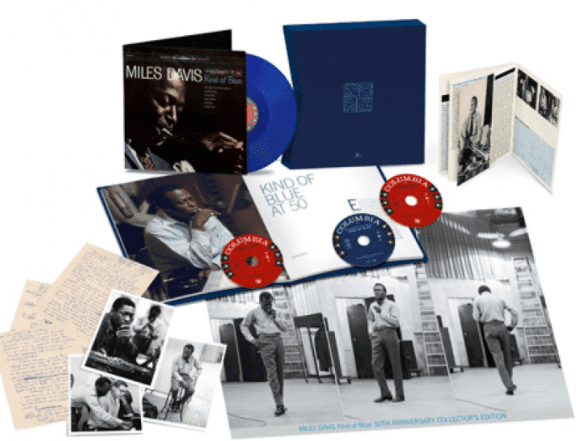 Box set memorabilia: 3-page hand-written liner notes by Bill Evans; reproduction of 1959 Columbia promo brochure; six 8×10 photos; and 22x 33 foldout poster.
Of special importance to Miles Davis aficionados around the globe is the DVD produced by Nell Mulderry: Celebrating A Masterpiece: Kind Of Blue. The new DVD incorporates material from the 2004 mini-documentary, Made In Heaven, including black-and-white still photography of the recording sessions and the voices of Miles (at the sessions), as well as excerpts of radio interviews with the late Bill Evans and Cannonball Adderley. There are interviews with musicians and luminaries including composer/performer David Amram, the late Ed Bradley, Ron Carter, Jimmy Cobb, Bill Cosby, Herbie Hancock (who demonstrates “So What” at the piano), Eddie Henderson, Shirley Horn, Dave Liebman, the late Jackie McLean, funk-rocker Me’Shell Ndege’Ocello, hip-hop’s Q-Tip, Carlos Santana, John Scofield, Horace Silver, and many others.

The DVD also unearths the group’s entire 26 minute in-session appearance on “Robert Herridge Theatre: The Sound of Miles Davis,” a CBS television program recorded in 1959 and broadcast in 1960. Another bonus feature is the gallery of images captured by Columbia staff photographer Don Hunstein, covering the original recording sessions, as well as a key performance at New York’s Plaza Hotel in September 1958. (Hunstein is prominently represented in the 50-plus images in the KIND OF BLUE: 50th book.) In conjunction with the latter, an unprecedented four-week exhibit of Miles Davis photography will be mounted at New York’s downtown Morrison Hotel Gallery in November-December 2008 (also featuring live music); the exhibit will then travel to other Morrison Hotel locations and Starwood Hotels in 2009.

Celebrating A Masterpiece: Kind Of Blue was directed by Chris Lenz, known for his work on the bonus DVD of interviews and performances that accompanied the 2003 Legacy Edition of Jeff Buckley Live At Sin-É. The new DVD was executive produced by Adam Block, co-produced by Ashley Kahn, and written by Michael Cuscuna.

At the absolute core of KIND OF BLUE: 50th is the original 45-minute album program, whose five titles – “So What,” “Freddie Freeloader,” “Blue in Green,” “All Blues,” and “Flamenco Sketches” – are indelibly etched in our contemporary musical DNA, be it jazz, rock, third through fifth stream classical, or beyond. They are familiar old acquaintances on the LP as it existed in the marketplace for nearly three decades: the first three numbers occupying side one (which happened to have been cut on the first day of recording, two three-hour sessions on Monday, March 2, 1959); and the last two numbers on side two (recorded at the final three-hour session of Wednesday, April 22, 1959).