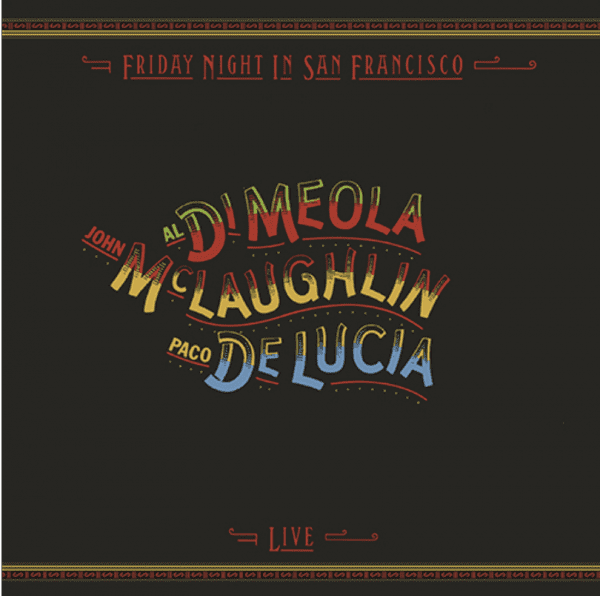 Friday Night In San Francisco is a 1981 live album by Al Di Meola, John McLaughlin and Paco de Lucia. It was described by jazz author and critic Walter Kolosky as «a musical event that could be compared to the Benny Goodman Band’s performance at Carnegie Hall in 1938…[it] may be considered the most influential of all live acoustic guitar albums. All the tracks except Guardian Angel were recorded live at The Warfield Theatre on December 5, 1980 in San Francisco.

This debut recording on Columbia Records became a landmark recording that surpassed the two million mark in sales. The three virtuosos in the Trio toured together from 1980 through 1983.

Ah the Mediterranean… Filled with fine foods, wines, beautiful people, and the inspirational style of music that descended upon the able fingers of these guitar giants. This is by far one of the hottest guitar albums ever to bless sweet vinyl. Al Dimeola, John McLaughlin, & Paco Delucia play classical guitars (the kind with the nylon strings) in a flamenco / jazz style that will blow your socks off!

Paco de Lucia was a Spanish flamenco guitarist, composer and producer. A leading proponent of the New Flamenco style, he helped legitimize flamenco among the establishment in Spain, and was one of the first flamenco guitarists to have successfully crossed over into other genres of music such as classical and jazz. De Lucia was noted for his fast and fluent finger style runs. His collaborations with guitarists John McLaughlin and Al Di Meola saw him gain wider popularity outside his native Spain.

Al Di Meola is an acclaimed jazz fusion and Latin jazz guitarist, composer, and record producer. With a musical career that has spanned more than three decades, he has become respected as one of the most influential guitarists in jazz to date. Albums such as Friday Night In San Francisco have earned him both artistic and commercial success with a solid fan base throughout the world. A prolific composer and prodigious six-string talent, Di Meola has amassed over 20 albums as a leader while collaborating on a dozen or so others.

John McLaughlin is an English guitarist, bandleader and composer. His music includes many genres of jazz and rock, which he coupled with an interest in Indian classical music to become one of the pioneering figures in fusion. In 2010, guitarist Jeff Beck called him «the best guitarist alive.» In 2003, McLaughlin was ranked 49th in Rolling Stone’s «100 Greatest Guitarists of All Time.» After contributing to several key British groups of the early sixties and making his first solo record, he moved to the US where he played with Tony Williams’ group Lifetime and then with Miles Davis on his landmark electric-jazz fusion albums: In A Silent Way, Bitches Brew, A Tribute To Jack Johnson and On The Corner.

«Recorded in 1981 at San Francisco’s Garfield Theatre, there must have been magic in the air that Friday night. John McLaughlin, Al Di Meola, and Paco De Lucia put on a show that was by most accounts an amazing turning point in concert and recording history…No percussion, no bass, no piano, no brass. Just three of the finest guitarists alive providing an acoustic masterpiece of breath taking melodic interludes and mind boggling improvisation…For me, the tough choice for «King of the Hill» is between the Impex 180 Gram Numbered Limited Edition and the ORG 45 RPM…The ORG has a rich natural presentation with a liquidity that is quite alluringstill plenty of dynamic punch and immediacy. The Impex is slightly more detailed with a locked in sound stage and imaging to die for. No edge. No fatigue. Just very refined and tangible. The Impex would be my choice as it does a better job of defining the differences between the harmonics and sound of all three musicians and guitarsmuch of which was lost in the digital renditions and only slightly more clarified on vinyl. But I am splitting hairs here on these last two. Both are absolute killer pressings and either would be an outstanding addition to your collection.» – Robert S. Youman, positive-feedback.com

«Loose and spontaneous, this (mainly) live album is a meeting of three of the greatest guitarists in the world for an acoustic summit the likes of which the guitar-playing community rarely sees. Broken up into three duo and two trio performances, Friday Night in San Francisco catches all three players at the peaks of their quite formidable powers.» – www.allmusic.com

«I wish I could remember here I was on, and more than that I wish I could remember that I was at the Warfield Theatre in San Francisco on December, 5, 1980, where this concert was recorded. Three of the worlds great guitar players played on the same bill, and their performances were to die for. The Guitar Trio formed in 1979, was originally composed of McLaughlin, Paco De Lucia, and Larry Coryell, but after the release of this album, Al Di Meola replaced Coryell as a member. McLaughlin, the senior and perhaps best-known member of the group, was an early advocate of jazz fusion, and the elements he fused included principally electric jazz and Indian classical music, with some blues, flamenco and western classical music mixed in. A list of the groups he was associated with would exceed the word count of this article, but his albums with Miles Davis, The Mahavishnu Orchestra, and Shakti are well represented in the collections of any guitar fan. Di Meola, known for his lightning speed and technical prowess, trained at Berklee College of Music and came to prominence as a member of Return To Forever. Of Italian heritage, his playing extracts the essence of Mediterranean and flamenco. Sadly, Paco De Lucia passed away in 2014, leaving a powerful body of work (including this live masterpiece). Where the other two members incorporate flamenco into their music, de Lucia was first and foremost a flamenco guitar artist, and in his case, he incorporated jazz and classical music into his flamenco art. Like Di Meola and McLaughlin, he could play with lightning speed. Many music lovers first came to flamenco music through its use in jazz. Flamenco, however, dates back to the eighteenth century. Associated with the Romani people of Spain (gypsies), its roots spread wider, encompassing musical styles throughout the Andalusia area of Spain. Today, the sounds of flamenco guitar, castanets and hand-clapping have spread across a wide spectrum of performance styles. Some of my most treasured discs include a three 10 disc set titled Anthologie De Cante Flamenco on Ducretet-Thomson (LA1051-52-53) published in the early 1950s and Carmen Amayas Queen of the Gypsies on Decca DL 9616. These are likely some of the same records Di Meola, McLaughlin, and De Lucia pored over as youngsters, learning their craft. None of them, however, remained hide-bound or stuck in old ways of thinking, and their updated take on the Andalusia spirit was never more in evidence than in this mostly live recording. Frequently, putting three superstars together on a single disc backfires (the magic almost happened again on their later studio album, Passion, Grace and Fire), but here the three play at their respective peaks and the result is one of the great guitar discs of all time. The LP has never been out of print, and has always been considered an audiophile demonstration record. Even before cracking the seal on my copy of the new Impex reissue, I began seeing reports on the internet, claiming that an original pressing blew away the new reissue, or that it was doomed to failure because modern 180 grams records always sound inferior due to chemicals incorporated into the vinyl compound. Rather than sending the review copy back to Impex, I decided to listen to it and compare it to an original US pressing as well as the last reissue from the Original Recording Group (ORG) released in 2012, but no longer available. The Impex reissue was mastered from the original analogue master tapes by Bernie Grundman, with Impexs Bob Donnelly sitting in (but not credited in the wax). Its an edition limited to 3,000 copies and pressed at RTI in California. Unlike Impexs recent Legrand Jazz, the cover is not the ultra heavy cardboard version used there, but it is still heavy stock cardboard. The sound is rich yet retains all the detail of the original. The Columbia original, by comparison, sounds a bit threadbare, where the Impex adds plenty of instrumental body and stage depth. Its a big step up from the original and edges out the ORG 45 rpm version by a hair. A huge sonic and musical thumbs up! «Recording: 10 Music: 10 – Dennis Davis, HI-FI+