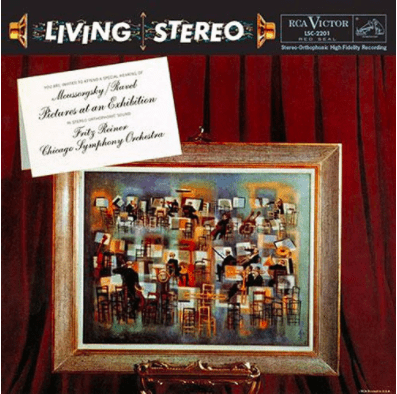 Another sonic and musical blockbuster from the unbeatable combo of Reiner and RCA (and Mohr & Layton). Recorded in 1957 at Chicago’s Orchestra Hall; the original analog session tapes were used in mastering for LPs. Mussorgsky’s inspiration for Pictures was the death of his dear friend, the architect and visual artist Victor Hartman. Having died at age 39, Hartman had not yet had the opportunity to realize any of his architectural visions, and Mussorgsky was angered that his friend would have no legacy. The Architects’ Society arranged an exhibition of some of Hartman’s sketches  some of architecture, others of characters or scenes from everyday life. The tribute was enough to give Mussorgsky ideas for his composition, but not enough to give Hartman any lasting place in history. Today, of all of the sketches that were captured in music, only six can be positively identified.

The piece is known today primarily through the orchestral version created by Maurice Ravel in 1922. In fact, the work had already been orchestrated multiple times, by a variety of lesser names. Some conductors today find that Ravel’s version, in spite of its color, sacrifices some of the coarse nature inherent in Mussorgsky’s piano original. Furthermore, Ravel worked from Rimsky-Korsakov’s edited version of the piano part – the only one available at the time – which changed some notes and rhythms.

None of the orchestrations, however, change the fundamental spirit of the piece. Mussorgsky imagines himself making his way down the hallway that showcased his late friend’s work, with his stately procession represented by the Promenade that opens the piece and returns several times. Upon stopping at each image, he reflects on what he sees. Between the early movements, the promenade returns regularly, as Mussorgsky is conscious of moving from one scene to the next. As the work progresses, however, he becomes less aware of the interval between pictures, and more immersed in the continuous psychological experience of moving from one state of mind to the next. By the end, the composer sees himself transformed by the connection with Hartman through his visual expressions of Russian pride and humanity.