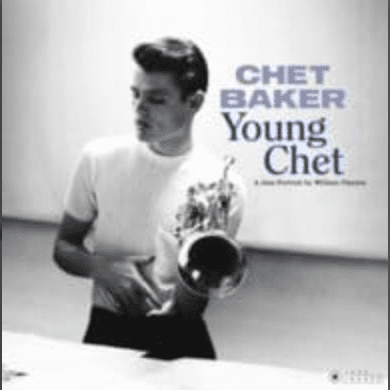 A Jazz Portrait By William Claxton

Chet Baker (1929-1988) is often referred to as “the James Dean of Jazz.” The iconic trumpeter and singer of the West Coast cool school left a profound mark on the genre during his 40-year career. Celebrated both for his music and his looks (enhanced in his early years by William Claxton’s superb photographs), his life and career were marred by his addiction to drugs, as seen in the recent film Born to Be Blue (2015), starring Ethan Hawke in the role of Chet.

Chet Baker was celebrated both as a trumpet player and as a singer. Both his trumpet and voice seem to be extensions of the same musical personality, and once you’ve become familiar with both facets of Baker, you expect to hear them both. This album was a revelation at the time and won Baker new fame and a new audience, which was less familiar with jazz than with pop music. Among many other highlights, it includes his classic vocal version of “My Funny Valentine”.

Although Chet Baker has become best known for his highly lyrical and introspective style (with respect to both his singing and horn playing), his sound could also be “forceful” in the style associated with East Coast jazz. This set finds him in the company of wonderful East Coast musicians, tenor saxophonist Johnny Griffin, pianist Al Haig (best known for his work with Charlie Parker), and two members of the classic Miles Davis Quintet: bassist Paul Chambers and drummer Philly Joe Jones.

The May 9, 1954 concert at Ann Arbor took place at the Masonic Temple in downtown Ann Arbor. The Michigan Daily’s Sunday edition included an article by a local jazz writer, who promoted the concert mentioning Baker’s sudden rise to fame and unprecedented achievement of winning both the Down Beat and Metronome Poll Awards in the same year. Chet is the only horn here, playing with his wonderful quartet, which also included Russ Freeman on piano, Carson Smith on bass, and Bob Neel on drums.