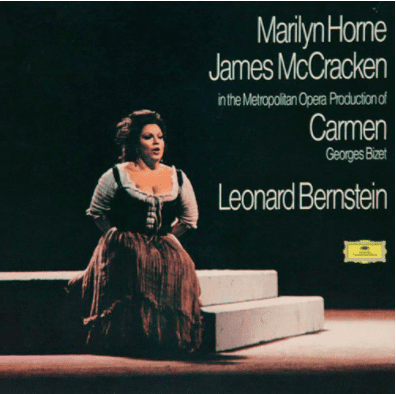 On this release, Marilyn Horne and James McCracken star in the Metropolitan Opera Production of Bizet’s Carmen directed by Leonard Bernstein.

Leonard Bernstein hints at the works inevitable tragedy already in the agonizingly weighty clashing cymbals of the surprisingly slow opening. His rustic-sounding street scenes are filled with vaudeville, raw and authentic, and so typical of how people behave when they dance out-of-doors. This Carmen is far closer to the cracking «West Side Story» than a saturated «Traviata.»

Marilyn Horne in the title role lends the full-blooded Carmen such an incredible voice in all manner of moods that one can hardly believe that we are listening to just one singer. One minute we hear the bright voice of a young girl lusting for life, and in the next minute the mezzo-like pained cry of a man-killing heroine. James McCracken has a distinctive dry voice, which is full of rousing passion, and is ideal in the role of Don José. He is complemented by the dramatic, powerful baritone Tom Krause as the torero Escamillo.

Harry Pearson, the founder and former Editor in Chief of the specialist magazine The Absolute Sound accorded this outstanding recording a regular mention in his ‘super disc’ list.

«The superb cast, headed by Mariln Home at her most glorious-how nice to have a Carmne with a voice of real womanly depth and body… Dynamic, vivid, and spectacular, fully worthy of a great performance that belongs in every serious opera collection.» – Paul Seydor, The Absolute Sound, October 2015