Allan Taylor All Is One 180g LP 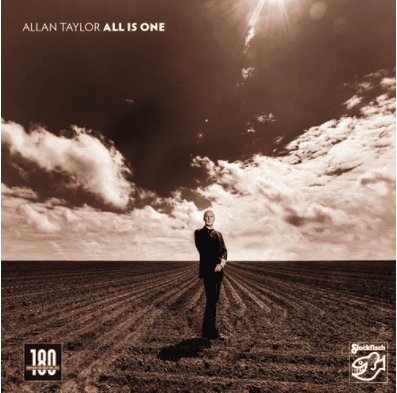 Allan Taylor All Is One 180g LP

On previous albums Allan Taylor sang songs about the road, about all the different countries and all the hotel rooms… «All Is One» goes deeper – into time and ultimately to the recognition that All Is One. A powerful philosophical statement delivered with virtuoso lightness.

Someone who is approaching 70 and calls his album «All Is One» obviously has something to say. Just recently Allan Taylor faced one of life’s tests – a severe shoulder dysfunction prevented him from playing guitar – not an easy situation for a musician. In the meantime that is thankfully all healed and forgotten. Not shying away from the strain and frustration involved, he worked his way back to his instrument, his fans and to the recording studio at Stockfisch Records. He could have presented this album as a big comeback, a resurrection, but that is simply not the style of this master of contemplative tones.

Insiders will recognize a stringent continuation of his 2009 album «Leaving at Dawn». Even then it was about leaving, about long journeys, the poetry of movement – subjects even more strongly represented on this album. Instead of driving on asphalt it’s about moving through time, and the title song is the best example. He wrote the first lines back in 2004, which kept flickering back to him and could finally now be completed. The lyrics tell of old guitars and of velvet gloves which close doors – but the song is a long way from drowning in sentimental resignation. Those who can read between the lines will discover a clever mixture of dance and march: «One final dance unites us all».

Taylor plays his favorite Martin guitars with the same sensitivity for body, expression and autonomy which one finds in his vocal performance – always moving, and never merely vague. In the last song Allan Taylor summarizes: «I may not be the perfect man, I guess I’ll do the best I can» – and ends the album with the bemused lightness of a simple D-major chord. Maybe a touch too modest for a master?

«In an interview with The Living Tradition, Allan Taylor did an excellent job of describing what makes All Is One such a memorable album. «Because Stockfisch Records are so good at capturing an aural environment,» Taylor said, «I knew they were the ideal company to create the sound I had in my head, a kind of wide-open landscape with lots of space between the sounds. There’s a difference between space and emptiness: it’s possible to have a very spare or sparse sound – very few instruments – and yet the final record can still sound full. That’s precisely what I was aiming for when I started making the record.» At times the highly reflective All Is One almost feels confessional; clearly Taylor, in his late 60s at the time the record was recorded, felt a mixture of regret and nostalgia. There’s a deep, rich gravitas to Taylor’s voice. He comes across as a romantic and a realist who, though far from naive, still has hope…» – Jeff Wilson, The Absolute Sound, October 2019